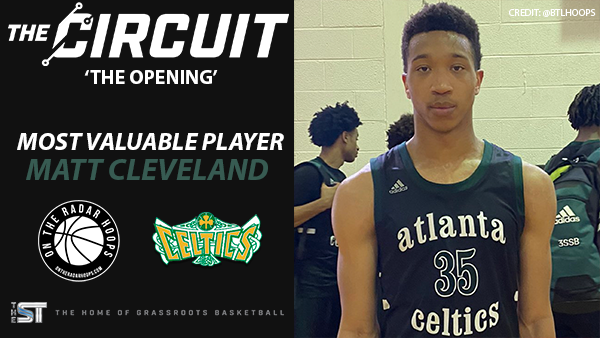 COVID-19 forced the 2020 grassroots basketball world into a tailspin, and players were forced with a decision; sit and sulk about everything going on, or accept the new reality and continue to improve.

After his performance at 'The Opening', it's clear Matt Cleveland chose the latter.

The 6-foot-7 combo guard was brilliant in his debut for the Atlanta Celtics, putting up back-to-back 30 point games - both wins.

In the season opener, Cleveland racked up 32 points, seven rebounds and four assists, displaying a tremendous balance of strength, athleticism and skill. He slid in the rotation relatively perfectly alongside fellow 5-star prospect Jabari Smith, and he kept up the dominant showing. The rising senior put up 32 points and seven rebounds for the second consecutive game, this time tallying four blocks alongside his gaudy stat-line.

Simply put, the Pace Academy (GA) product was in a zone, and his head coach was left impressed.

"We are looking for him make a jump," Atlanta Celtics head coach Patrick Harper said. "I think have the best duo in AAU."

After one weekend, the pairing of Cleveland and Smith definitely have a strong case. Make sure to continue to follow Cleveland and the Celtics as they head to the Tip-Off Classic next weekend in Atlanta, followed by Lakepoint Hoops Live on July 10-12.

2021 Aaron Scott is healthy and doing his thing at Who Want The Smoke 💨 🎥 @BallSoHardSS @Aaronnscotttt… https://t.co/na3PjP9pXt

RT @MEdwardsBball: My man at @HoopHustlers is about to drop a Special Project on @YouTube ya’ll need to Follow him and be ready when it Hit…

Academic qualifications have you confused? 🎓 @HonestGameCARES is here to help & has the ANSWER to all of your elig… https://t.co/A4e1KFSe9y

@TeHoliman appreciate you being good at basketball.