Who Want The Smoke: Top Performers

Who Want the Smoke: Top Performers in the 17U Division

Duncanville, Texas was the site of the Who Want the Smoke tournament organized by Kellen Buffington, founder of theTB5reports.com. The event took place over 3 days and brought together teams from the Nike EYBL, Adidas 3SSB and Under Armour circuits for a weekend of top competition. The on-court play of many players justified their national 5-star and 4-star rankings after it was all said and done, but there were also players without rankings or long lists of offers that put in tremendous performances. In this article, we identify the top performers from each class in the 17U division from the tournament.

Recent Baylor commit Langston Love made a surprise appearance this weekend for Basketball Means More (BMM) and let his presence be known. Love was disruptive on the defensive end from the get go and created lots of turnovers. He showed a lot of versatility effectively guarding both frontcourt and backcourt players. He also made the right reads in transition and forced ball-handlers to score under pressure.

Love’s grit on the defensive end mirrored his offensive output as well. He relentlessly attacked the interior of the defense and made frequent trips to the free throw line. He showed plenty of physicality to fight off contact in traffic and hold his defenders at bay before finishing with touch.

Southern Assault’s lead guard was ever present as a scoring threat throughout the weekend. Wade Taylor IV was a monster from the perimeter and consistently put pressure on the defense to run him off the 3-point line. His effectiveness shooting the ball vastly opened the floor for him to attack off the dribble. His burst was exceptional and showcased Taylor’s ability to stop on a dime and hit pull up jumpers.

With space to move downhill, he also turned into a strong playmaker. Taylor opened up passing lanes for perimeter shots and drew in bigs to hit teammates for layups under the basket. In the lane, he welcomed contact from other players and possessed the physicality and touch to complete plays at the rim. He holds offers from Oklahoma State, Florida State, Texas A&M, TCU, Baylor, Virginia Tech and more, while receiving interest from other Power 5 programs.

Team Griffin’s 5-star center continued his strong week, after a productive team camp. Daimion Collins played for TAZ Elite this weekend and had the opportunity to face off against some of the best frontcourt players the state has to offer. He continued to display his dominance rebounding the basketball and is routinely able to high point the ball before his opponents are able to effectively track its path off the rim. Collins was a monster protecting the paint as well, with multiple games of 4+ blocks. He timed his jumps well and affected shots on-ball and as a weakside helper.

His versatility on the offensive end adds a lot of intrigue to his game. He operated effectively as both a roll man and popping out for midrange and perimeter shots with teammate Cason Wallace. Collins becomes a big mismatch for a lot of frontcourt players with his ability to put the ball on the floor comfortably and use his length to reach the rim before a shot contest can arrive.

The lefty guard exhibited tons of speed on the floor and was a problem for defenses this weekend. Manny Obaseki scored effectively from all three levels and mixed in his offensive looks to take advantage of hard closeouts on the perimeter. He was able to blow by defenders and attack the paint or utilize his midrange ability to put points on the board.

Obaseki works very well in the pick-and-roll and can put defenses on the ropes with his ability to knife through traffic. He is very dangerous off the dribble and he can create a lot of space for his teammates to shoot the ball comfortably as well. The Texas A&M commit transferred this offseason and will be teaming up with Texas Tech commit Jaylon Tyson. 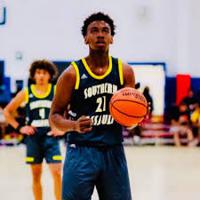 One of the most active players, in all areas of the floor, was Southern Assault’s Chrisdon Morgan. The incoming senior was extremely physical and consistently making plays for his team on both sides of the ball. Morgan was competitive on the glass against taller and truer bigs and had little issue fighting through contact around the rim on putback attempts.

He was an asset as a stretch forward capable of putting the ball on the floor. He also operated well in the pick-and-roll and possesses good hands and vision to catch passes in traffic. Morgan was also a stout defender and affected a lot of shots inside the paint with a quick first jump. Currently, he holds offers from New Orleans, Morgan State, Marist, Texas Southern and Kansas State.

On the heels of making our top performers list from Team Griffin’s ‘Closed Session’ last weekend, Cason Wallace continued his exceptional play for TAZ Elite. The 4-star has repeatedly outplayed his national ranking and has demonstrated great leadership through his on-court production. Wallace was able to manipulate defenses throughout the weekend to score at will and from all 3 levels. If there was a specific shot you were looking for from him, you can believe it happened. However, this weekend it was the little things that helped him to standout even more.

Wallace was very active in making all of the plays that would lead to victories on the floor. He stifled ball handlers, battled bigs for rebounds and was fearless in climbing the trees to score the ball through contact. He sets the tone in every phase of the game and it’s incredibly hard not to tune in when he steps on the floor. He is constantly focused on playing at the highest level and has no trouble getting the job done. He’s certainly amongst the top performers on the whole weekend, if not the top.

Cason Wallace (2022) gets his fingerprints on every damn thing. Here with the chase down and save on Baylor commit Langston Love: pic.twitter.com/D2gSZYTcYW

BMM’s second player on the list has the ability to turn the tides of a game in the blink of an eye. Keyonte George combined with Langston Love for one of the most dangerous and productive backcourt duos this weekend. George was effective off the dribble and commanded the attention of the entire defense. He created a lot of opportunities inside the 3-point line and utilized his midrange looks well.

George didn’t force the issue and took the opportunities the defense gave him. He showed balanced shot selection and was constantly adding to his scoring tally. He is showing more and more comfort against top-level competition every time he steps on the court and his matchup against Cason Wallace was one of the best head-to-head battles of the weekend. He holds offers from Arizona, Arkansas, Baylor, Florida, Kansas, LSU, Oklahoma, Oklahoma State, Texas, Texas Tech and more.

Keyonte George continues to shoot the basketball extremely well everyone talks about his eye-popping athleticism but his jumpshot has continued to improve. @Keyontekg1 pic.twitter.com/Bul8TUbzJJ 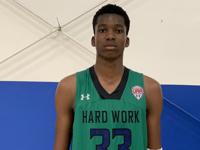 One half of Texas Hardwork’s monstrous center duo, Vince Iwuchukwu was noticeably impactful this weekend. A reliable part of their offense, he was able to get deep post-position against opponents and his initial attack to the basket pinned defenders on his hip. He made quick and powerful moves to the rim and was able to put several defenders on a poster during the tournament.

Iwuchukwu was one of the most dominant rebounders during the weekend and afforded himself easy baskets around the rim for his efforts. He showed great defensive integrity in both the paint and on the perimeter. He moved his feet well and tracked shooters well to block shots. Iwuchukwu recently announced a transfer to La Lumiere (IN) and holds offers from Arkansas, Baylor, Florida State, Oklahoma State, Kansas, Purdue, Texas, Texas Tech, Texas A&M and TCU.

One of the most consistent and productive defenders from this weekend was Jordan Walsh. The Drive Nation wing has a long wingspan and was very disruptive in passing lanes and guarding the ball. He posted a game this weekend with 5 steals and created a lot of extra chances on the scoreboard for his team strictly on the defensive side of the court. He moves his feet well and has sound defensive principles in all situations. His length is also problematic on the glass where his first and second jumps caused issues for frontcourt players to pull down rebounds.

Walsh also boasted a sound offensive game and featured a lot of different aspects of his skillset. He was comfortable running off screens and taking rhythm midrange jumpers. However, he was also capable of producing out of the pick-and-roll as the primary ball-handler and off the dribble. He brings a lot to the table and puts forth a lot of effort on the floor to help his team. Walsh holds offers from Arkansas, Cal, TCU, Texas, Texas A&M, Texas Tech and Oklahoma State. 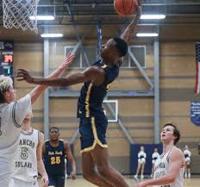 After another productive weekend, TJ Caldwell was another player from the Team Griffin ‘Closed Session’ making a big impact at Who Want the Smoke. Caldwell was very active around the rim on the offensive end and finished plays with acrobatic shots. He attacked the glass and rim to give himself and his team extra opportunities in their games, including a highlight-reel putback dunk.

Caldwell is comfortable coming off of screens and hitting midrange shots, as well as a consistent perimeter shooter. He leaves all of the effort on the floor and makes impact plays down the stretch of games, as his opponents wear down. He holds offers from Nebraska, Oklahoma, Oklahoma State, Tulsa and SMU.

RT @AlecKinsky: It’s becoming evident that this needs to be explained to prospects & parents: If you’re invited to a private combine for a…

All invitations have been sent for the Coach Wootten Top 150 Camp @McDAAG https://t.co/bAyZlZxNDG

Tyler Herro tonight: 37 points, 6 rebounds and 3 assists on 14-for-21 shooting. Herro has scored in double-figure… https://t.co/VgzMZnreqs

This event will include boys and girls players auditioning for an invitation to the McDonald’s All-America Game.… https://t.co/1puXSiz9uV

RT @TheCircuitHoops: The McDonald’s All-American Game will be hosting an evaluation combine at Fieldhouse USA in Mansfield, Texas scheduled…

RT @TheCircuitHoops: The Circuit Podcast: Ep. 2 @RP3Natural doesn’t say this about many players, but hear why he would pay to watch @skyyc…

RT @TheCircuitHoops: Kendrick Perkins circa 2002 with @HoustonHoops17U 🔥 People do not understand how dominant @KendrickPerkins was as a…