The NIBC Invitational was filled with competitive games and great individual performances. Teams were put into the bubble and played many back to back games. Players had the opportunity to show of their skill sets and get matched up with some of our top ranked teams. Below you can see who performed the best and made our All Event Teams.

The 2022 forward brought intensity and dominance to every game that he played in. First, his defense was incredible. His ability to block shots turned into run outs and easy points for his team. On the offensive end, Duren was almost unstoppable. His built frame and height gave him the ability to back defenders down and use the jump hook to score over them. He also showed us his improvements in his jump shot. Many times we saw Duren pushed off the block and to the short corner where he faced up and knocked down shots. 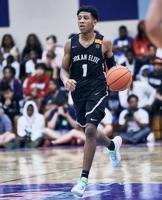 The number one ranked PG in the class of 2021 showed us why he has earned this respected title. Chandler is easily one of the quickest guards in his class and he used that to his advantage. He showed off his range on his much improved jump shot and dished out many passes that set his teammates up for easy points. On the defensive end, Chandler was a pest, making his opponents uncomfortable and causing them to turn the ball over. The Tennessee commit will be an immediate impact in his freshman season. 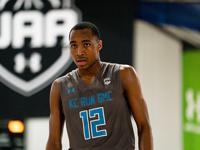 The Texas commit did what he does best, score the ball at a high rate. The lefty guard plays the game so smooth. Bates is great at creating his own show off the dribble. His downhill style of plays keep defenders on their toes because he can stop on a dime and pull up for a mid range jump shot. His long arms help him with finishing around the rim. Bates is a three level scorer who will excel in Texas' system.

Nolan Hickman did it all for Wasatch Academy. Hickman is a lethal shooter, and it does not matter if it is off the dribble or off the catch. Throughout all games he was great in the pick and roll game. He showed us that he can finish efficiently with either hand when attacking the rim. John Calipari has a great scoring guard coming in that can play off or on the ball.

The 2022 5 - star recruit is one of the hardest working, most intense players in the whole class. His motor is endless and it is contagious with his teammates. Rice can impact the game in so many ways. On offense we saw major improvements in his jump shot and it came at some big moments in their games. His downhill style of play led to many and-ones, tough finishes, and big time dunks. Rice will continue to improve his game and leadership skills being coached by Steve Smith and continue to help Oak Hill win many more games.

Vincent Iwuchukwu: No. 18 La Lumiere (IN)

Iwuchukwu was a force in the paint throughout every game that No. 18 La Lumiere played in. His abilities to finish over each shoulder maddest hard for smaller defenders to stop him. His free throw shooting has improved drastically which is great for him since he gets to the line a lot. On the glass, he was a monster. His rebounding was very helpful in not letting opponents getting second chance points. He has almost perfected shot blocking. His timing on blocking shots is incredible. Iwuchukwu is set to have a breakout summer with JL3 Elite and his stock will continue to rise.

Felix Okpara is easily one of the best big men from the class of 2022. He moves so well for someone his size and establishes himself in great scoring positions. His game has expanded to the three point line which makes him even more lethal on the offensive end. On the other end of the floor, Okpara makes it difficult for defenders to score. His lateral quickness has improved so now he can guard on the perimeter.

The Baylor pledge is one of the most explosive and exciting players in his whole class. He had many games with multiple steals, which leaded him to taking it the whole length of the court and finishing. His athletic ability is off the charts, catching multiple lobs and dunks through traffic. The athletic wing is a leader on this highly ranked Sunrise Christian team and will continue to put up great numbers for them.

The 6'10 stretch forward plays hard every minute of every game for IMG Academy. He has started to show us more that he can put the ball on the floor and take good shots from inside the perimeter. For his size, he moves so well. One aspect of his game that does to get much attention is his passing out of the post. Diabate knows where his teammates are going to be when posting up. Juwan Howard is getting a freak athlete and a scorer for next years Michigan Team. 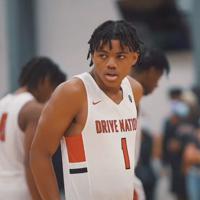 The 2022 combo guard showed out in iSchool's games. George is an elite scorer. His explosiveness allows him to get to the rim easily. He got to the free throw a lot and finished a good amount of and-ones. George continues to make improvements in his already great jump shot. He is one of the highest recruited players in his class and with the rest of this season, and a full senior season, he will make huge jumps in his game.

The UConn pledge opens eyes every time he steps on the court. His jumping ability is unreal, and he showed this off with many aggressive dunks. He loves coming to a jump stop when attacking the rim, which lets him explode to the rim and finish. His shot off the catch is lethal. Hawkins loves to push the ball off rebounds and sets his teammates up in great positions. 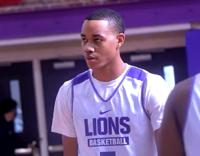 Nebraska is getting their highest recruit ever with Bryce McGowens and he brings a lot to the table. He scores the ball very effortlessly. Beyond the three point arc, McGowens has NBA range already. He can break you down off the dribble and get right into his shot. He can also be a vacillator and a playmaker for his teammates. He exploded for 38 points against Hamilton Heights, in any game he can do this.

Juwan Howard is getting maybe the best shooter from the class of 2021 in Caleb Houstan. He flourishes in Montverde's system. The stretch forward has the ability to put the ball on the floor and create fro himself. If he catches the ball on the perimeter, it is a good chance that it will be three points. Houstan is a great leader for this team and will continue to score the ball at a very hight rate at the next level.

Jalen Ricks was outstanding in all of their games. Ricks is a three level scorer who can make plays for others. His court vision is great, he uses this to set his teammates up and set the offense up. Ricks is a leader for this highly ranked Oak Hill team. His rebounding was incredible on the offensive and defensive glass. With him being one of the leaders of this team, Oak Hill is in good hands. 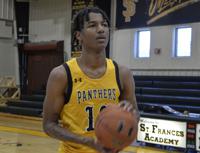 The Maryland pledge was unstoppable in both games for the Baltimore Panthers. Reese is a force on the offensive end. His big build and heights lets him muscle through contact and finish over defenders. On the glass, Reese grabs everything that comes off the rim. In both of their games he had a double-double with points and rebounds so he stood behind what he is know for doing, scoring and rebounding.

BREAKING: 'The Scrimmage' pres. by @TeamFinalEYBL set for April 17-18 ✔️ The 12th-annual event will feature 5⃣ of… https://t.co/e0IJbFkd2I

The Breakout 🤯 Nick Smith Jr The Sylvan Hills guard breaks down his recruitment, his experience with Brad Beal Eli… https://t.co/olGnBgMdtU

Excited for our team at @TheCircuitHoops to bring 1st-class media coverage to the Hoop Group Showcase League 💯 Rel… https://t.co/9Bfd7TNUmZ