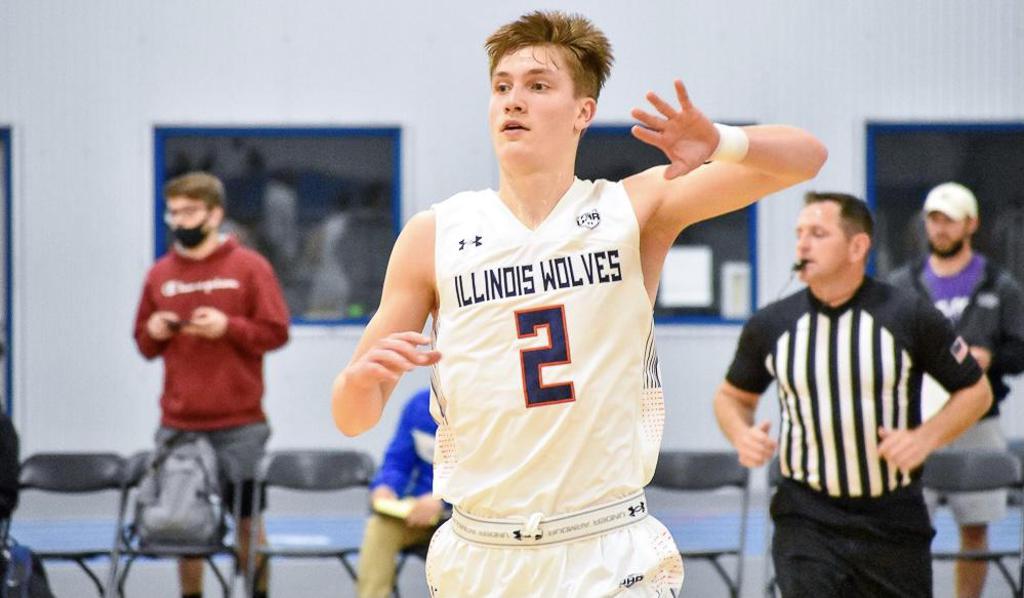 The second weekend of the July live period kicked off this past weekend. Dallas, Atlanta, Omaha, North Augusta, and Louisville were just a few main spots for college coaches to spectate prospects.

I was able to hit Dallas, Texas this past weekend for the Under Armor Associations second session and multiple next level coaches were in attendance in Frisco. Coaches from Texas, Kansas, Baylor, TCU, Auburn, Louisville, Virginia Tech, Maryland, Stephen F. Austin, Georgia, Elon, Montana, North Texas, Creighton, Wisconsin, Iowa, and others were in the building.

I spent two full days out in Dallas watching the UAA session II and below you can take a look at which prospects stood out and had excellent performances throughout the weekend.

2022 G Arterio Morris (iSchool Lewisville, TX)
It was a very big and important weekend for Arterio Morris. Why? The 6-foot-4 guard made his decision on where he will play college basketball in a couple of years and Texas was the choice. Besides his big commitment for his future, Arterio was one of the many standouts this past weekend in his hometown of Dallas at the UAA session II. He had multiple 20-point or more games including a game I witness where he went for 25 points while shooting 58% from the field and capturing 3 steals. Morris continues to prove he is one of the best scorers in the entire class. An electric scoring guard with great size, scores from all levels, displayed his change of speed and acceleration, proved he has playmaking abilities in his package, and his wiry strength when attacking the basket. Austin, Texas and new Texas head coach Chris Beard is getting a special unique talent in Arterio Morris.

2023 F/C Baye Fall (Denver Prep, CO)
6-foot-11 forward Baye Fall was outstanding all weekend in Dallas at the UAA session II with Colorado Hawks (CO). Arguably the number one prospect in the 2023 class, Fall has elite upside and great potential if he can continue to develop on and off the court. He posted 23 points while shooting 69% from the field with 10 boards along with 2 blocks in one game I caught. His length plays a very big factor in his game. His long arms assist him to block or alternate shots and ability to be a dynamic force on the glass. Baye plays with a very nice motor, runs the floor at all times, and a consistent finisher at the rim. The 6-foot-11 forward displayed his versatility on both ends of the floor. Being a switch defender guarding the wings defensively and showing he can stroke it from deep hitting a three pointer in the game I witness. He is an elite rim protector and interior intimidator.

2022 SG Jaden Schutt (Yorkville Christian, IL)
One of the hottest prospects in the country right now is nobody other than Jaden Schutt out of Yorkville Christian (IL). Florida and Duke were the most recent big time offers for Jaden Schutt, which he received after last weekend's live period. He continued his success on the court this past weekend in Dallas at the UAA session II. He is a 6-foot-4 two-guard with an elite shooting ability at all levels. His catch and shoot skill is next level, he holds great shot preparation, a great balance on his jump shot, elite coming off ball screens, and an extremely nice rapid shooting stroke. Schutt has positional size, will space the floor with his outstanding shot making, and showed he can make plays for his teammates. Jaden has been rising his stock over the last two weeks and had a few games where he scored 20 or more points which included a game I witnessed where he went for 25 points while shooting 69% from the field and 42% from three.

2022 F Taj Manning (Bishop Miege, KS)
Taj Manning had a phenomenal weekend out in Dallas at UAA's session II with KC Run GMC (KS), one of the best teams on the circuit. Manning is an interesting prospect in the 2022 class. At 6-foot-7, he is a versatile forward with nice athleticism. His football like body frame helps him be that versatile defender that can guard big men down low and he has the agility to guard the wings on the perimeter as well. Taj posted 18 points while shooting 63% from the field which include one made three pointer in the first game of the weekend that I was able to witness. His athletic ability also makes him an asset on the glass, he can block shots on the defensive end, and besides scoring in the painted area he can also hit a few jump shots as well. Manning holds offers already Tulsa, New Mexico, Missouri State, Creighton, and others at this point. A big time sleeper prospect in the loaded 2022 class.

2022 C Kel'el Ware (North Little Rock, AR)
It was a stock boosting type of weekend for the 6-foot-11+ Kel'el Ware running with hometown team All Arkansas Red (AR) this past weekend in Dallas. Ware gets lost in the national rankings all because he does not play on a top shoe circuit team. His game definitely speaks for itself and it showed this past weekend in front of a plethora of college coaches. Ware sits at a legit 6-foot-11 with an elite wingspan, is able to finish at the rim and in the paint at a high rate, his length certainly helps him be an elite rim protector and he runs the floor very well for his size. He posted 31 points points while shooting an incredible 91% from the field, snagging 11 boards, and 3 blocks in one game I witnessed. Kel'el also displayed his skills from the perimeter hitting a couple three's and proving he can be considered a stretch five at the next level. He is a skilled big man who has potential and unique versatility in his game. One of the best bigs in the entire loaded 2022 class. Should make a rise in the national rankings after this summer.

2022 PG B.J. Edwards (Knoxville Catholic, TN)
Coach Rick Barnes and his staff are getting one of the most undervalued prospects in the 2022 class in Brian Edwards Jr. The Tennessee commit had a solid outing out in Dallas with B. Maze Elite (TN) this past weekend. The 6-foot-2 point guard is super productive when on the floor. Edwards Jr. effects the game in so many ways. He continued to prove he can score along with facilitating the offense. He is able to score on all levels of the floor, has good strength to finish in traffic, helps crash the boards on both ends, and holds quick hands defensively snagging a few steals every game. He combined for 30 points, 12 assists, 14 boards, and 6 steals in two games I watched him this weekend in Dallas. B.J. Edwards is such an elite and underrated playmaker. A quality point guard heading to Tennessee in a couple years.

2023 PG Caleb Foster (Oak Hill Academy, VA)
Coming off his first season at powerhouse Oak Hill Academy (VA), Caleb Foster played fairly well in his time in Dallas playing up a level with Team Curry (NC). Foster is a 6-foot-3 point guard who is currently one of the best prospects in the 2023 class. He has great size, mature body frame, and nice IQ at the point guard spot. Foster posted 23 points while shooting 75% from the field while dishing out 7 assists with only two turnovers in a game I witnessed. Caleb showed his ability to create his own offense off the bounce, his reliable perimeter shooting, getting to the rim and finishing plays, and finding open teammates for scoring opportunities. At his size, he was also able to show he can rebound extremely well for a point guard. The rising junior will have an eye-opening junior season with head coach Steve Smith and the Oak Hill staff as Caleb will once again have the point guard duties on the national stage.

2022 F Jarace Walker (IMG Academy, FL)
First look at Jarace Walker this past weekend in Dallas since the end of his junior season at IMG Academy (FL). The DMV native ran with his local hometown team Team Thrill (MD). Walker was excellent in the couple games I watched him play in this weekend which included a fantastic game where he put up 24 points while shooting 50% from the field, 10 boards, 3 steals, and 7 blocks in a comeback win verse Grassroots Sizzle (MN). When Jarace Walker is playing aggressive, there is no stopping him whatsoever. His ability to block shots goes unnoticeable, he is an elite midrange scorer, underrated passer, an outstanding off-ball and on-ball defender, holds a college ready body, and always proves he can help rebound. Walker still has incredible upside and once he knows he can be unstoppable he will be an amazing next level basketball player.

2022 SG A.J. Smith (Combine Academy, NC)
One of my "undervalued" prospects in the 2022 class, A.J. Smith had an eye-opening weekend this weekend in Dallas at the UAA session II for the second live period this month. Smith has positional size at 6-foot-4, a physical strong guard, and holds nice defensive versatility. The rising senior displayed his shot making skills from the second level, finished through contact when attacking the rim, and was aggressive rebounding the ball as well. His strength and physical tools helps him be a contact finisher and help guard the bigs down low. Smith played with much more confidence this weekend scoring the ball and looking for his shot. He had coaches from Creighton, Virginia Tech, Wisconsin, Cal, Georgia, Auburn, and others court side for him at a couple games. Still a sleeper type prospect in the class, he should be receiving more attention as the year goes on.

2022 F Braden Huff (Glenbard West, IL)
Braden Huff might be the best kept secret in the 2022 class but should not be a secret any longer. He is a 6-foot-10 forward with tremendous skill and versatility. Playing alongside one of the hottest prospects in the country right now, Jaden Schutt, Braden is also an interesting prospect college coaches should keep their eyes on moving forward. At his size, he is a stretch four or five with his ability to knockdown shots from three-point range, has a solid handle, able to beat other forwards or bigs off the dribble when driving to the basket, and has impressive arms that helps him secure rebounds. Huff was also able to show his defensive footwork staying in front of guards and being a rim protector down inside the paint defensively. Northwestern, Vanderbilt, Wisconsin, Creighton, Virginia Tech, and others have already offered the versatile forward and more offers should start pouring in over the next few months.